In this installment of the series, Professor Darryl Gwynne, a professor of biology for 27 years at the University of Toronto Mississauga (UTM), talks about his research on Maud Island, New Zealand.

What kind of research are you doing?

Males of many animal species sport elaborate weaponry or ornamentation used in competing for and attracting mates. Although such traits were explained by Darwin to have evolved through sexual selection, we still lack a full understanding of why this type of selection has a greater effect on males than on females. 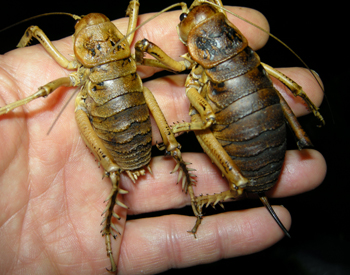 Typically, males compete for access to mates and in many animals have evolved armament traits that function in contests with rival males, or ornaments that attract choosy females.  However, in some animals there is a reversal of sex roles and the research in my lab focuses on this type of selection. In other words, our research examines why sexually-selected females compete for access to choosy males. Our work has provided the first experimental tests of how male reproductive investment controls the sex roles.

Male investment in our work refers to activities such as valuable mating meals (nuptial gifts) that females compete for; e.g., prey in empid dance flies (Diptera: Empididae) and the spermatophore gift and other glandular secretions in three families of orthopteran insects (crickets, katydids and New Zealand weta).

What makes your workspace unique? 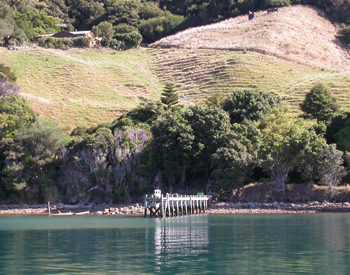 Often our research takes us into the field and sometimes to exotic locations in New Zealand and Australia. For example, we travel to Maud Island, in the Marlborough Sounds of New Zealand, because three species of weta can be found there in abundance.

What is a day in the life of a researcher like on Maud Island?

Travel to Maud, called Te Hoiere by the Maori, is a boat trip across the calm waters of Pelorus Sound on the top end of the South Island near Marlborough (best known for its fine wines). The voyage is not much more than an hour if we catch one of the infrequent Conservation Department vessels but most times we hop aboard the Mail Boat that takes most of the day to wind its way along the coastal drop-offs for mail and supplies to eventually reach the Island Conservation Reserve.

Field work on the island is far more comfortable than at some of our other field locations as we are accommodated in a spacious lodge overlooking the Sound. However, night work can be trying – especially on rainy nights when using a large radio telemetry antenna to track down tagged insects, and especially when our quarry has worked its way into thick bush or onto a steep sea-cliff. However, the rewards include finding our radio-equipped insects in the act of mating (one of our prime objectives!) and occasionally encountering some amazing wildlife. 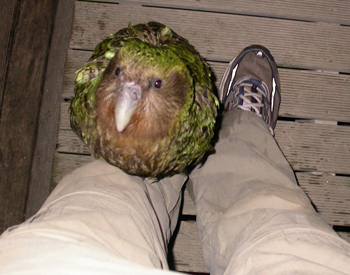 New Zealand’s island reserves are refuges from exotic predators such as cats and rats.  Among those protected on Maud Island is the enormous giant weta, one of our main study species, and another heavyweight, the world’s largest parrot, the flightless kakapo. This inquisitive bird has occasionally shuffled out of the undergrowth to check out our nocturnal activities. We were warned about one particular individual, Sirocco, because of his predilection for climbing up humans and attempting to copulate with their heads (this well-known bird now has his own Wikipedia entry).