In the first installment of the series, we had the opportunity to meet with colleagues at the Forensic Science Program at the Mississauga campus. 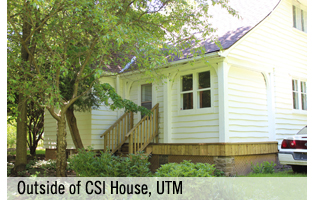 It’s a non-descript white cottage that sits just off the main road. Surrounded by trees, CSI House — once a home for an English professor — now plays a starring role in providing students, staff and academics with field research experience.

Teresa Cabral, Program Administrator & Academic Advisor at the Forensic Science Program, has worked with the program since it launched in 1995, becoming Canada’s first Bachelor of Science program in Forensic Science. In that time, she has witnessed first-hand the rapid growth of the program.

The program’s popularity is due, in part, to the number of opportunities for students to team up with forensic science experts and gain placement. “For instance, of those in the 2012 to 2013 class, a number of our students worked with the Chief Coroner’s Office in Toronto, and some students have gained international experience working for agencies in the UK and Singapore,” says Cabral. 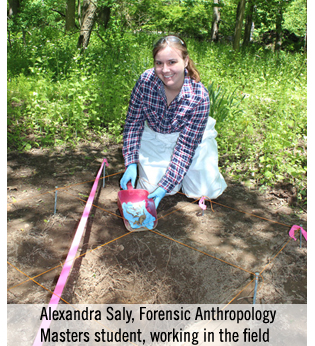 When asked for a word that best describes where she works, Teresa was quick to respond. “I would definitely say ‘diverse’ in terms of the type of people we work with, the opportunities, and the locations — whether it be field work, or spending a couple of afternoons here at the Crime House. ”

The house itself provides students with the opportunity to investigate simulated crime sciences in a realistic setting. It allows students to put theory into practice, including the collection and analysis of data such as DNA, fingerprints, footwear impressions, tool marks and trace evidence. The area outside the house simulates outdoor crime scenes, such as burials and vehicle crime scenes.

Jessica Lam, an alumna and current master’s student with the program, is also the outreach coordinator and program administrator. She says that one of the things that really impressed her about the program is their willingness to try new things. “[The program] is not just about the theory, [it also] gives us hands-on experience that prepares us for work after graduation,” says Lam. “Working at places like the Crime House allows us to apply what we’ve learned. We can literally throw blood around,” she added.

Among the individuals who willingly shared part of their afternoon with us at the Crime House:

Read more about this program on the Forensic Science Program website.