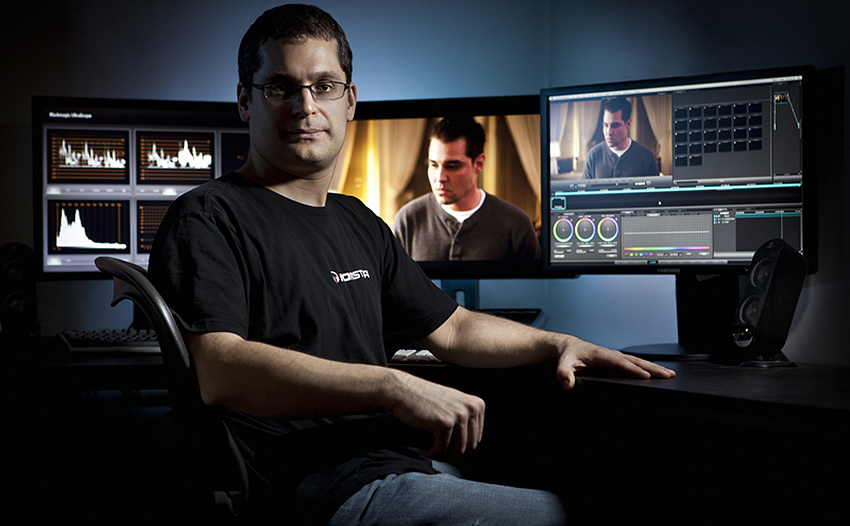 Walter has been with the University of Toronto (U of T) for seven months.

What do you do ‘off the clock?’

I am a digital intermediate colourist (DI Colourist); I provide colour grading services for independent filmmakers.

What is a DI colourist?

Basically, I balance the brightness and colour saturation, adjusting the look and feel of a film scene by scene. I use the industry standard DaVinci Resolve colour grading software to achieve amazing results. Great examples of colour grading would be films like Fight Club, Sin City, and O Brother Where Art Thou? All of these films use colour grading to alter the audience’s perception and emotions — making the overall tone warmer, colder or desaturated. It’s really quite fascinating.

How did you become interested in being a colourist?

Initially, I worked in the film industry for Deluxe Laboratories as a Foley recordist. After doing that for seven years, I went to work for Apple Inc. in Cupertino, California. It was there that I became interested in colour grading.

I was hired to open stores for Apple, working as a creative trainer. I taught industry professionals and customers how to use Color, Apple’s colour grading software. I enjoyed it so much I attended the International Colorist Academy (ICA) in Burbank, California to become a certified colourist.

I moved back to Hamilton to be closer to my parents shortly after my sister passed away. I built a state-of-the-art boutique studio in my home and started to freelance for independent filmmakers.

What films have you worked on?

The first film I colour graded was a quirky short film called A Day Off. I also worked on Sad Monster, an award-winning short film by Kurt Dettbarn, and I recently started working on a 10-part documentary based on the history of Hamilton called Neighbourhoods Rising.

Warren Eagles, an Australian colourist, is one of my mentors. I studied with him at ICA. He really opened my eyes to the wonderful world of colour grading. Stefan Sonnenfeld’s work from Company 3 is also a source of inspiration. He worked on films such as Star Trek Into Darkness and the Pirates of the Caribbean franchises. Sonnenfeld is evocative, he is continually turning the industry on its head.