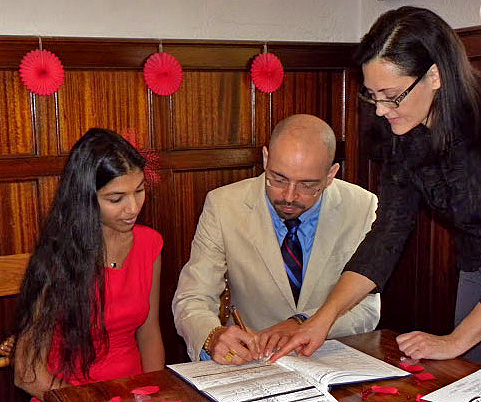 Tade has been with the University of Toronto (U of T) for four-and-a-half years.

I marry people — sometimes a few each month and sometimes several in a day.

As a wedding officiant, I’ve led handfastings, native matedness, and traditional ceremonies for couples, which can range from civil to spiritual, indoors to outdoors, long to short and sweet.

I returned from Scotland in 2002 after having participated in handfasting ceremonies — a wedding ceremony that is said to date to the Pictish and Viking times. The ceremony involves the couple’s clasped hands being lightly bound with cords or ribbon and an expectation that they renew their commitment every year. Describing the meaning behind ‘tying the knot’ this way encouraged friends to ask me to add this element to their traditional weddings ceremonies.

When friends asked that I marry them as a legal officiant, I proceeded to get interviewed and licensed in Ontario as clergy with All Seasons Weddings.

What is the most memorable ceremony you’ve presided over?

Although an upcoming wedding themed from the HBO program Game of Thrones might take the cake, I will never forget the first time I had the honour of performing my first ceremony. To be standing in the epicentre of two people celebrating their love and commitment to each other as they stare into each other’s eyes leaves me jittery with excitement.

I’m inspired by each couple I have had the privilege of working with. Whether the couple is renewing their vows after 35 years or getting married to each other for the first time, they are inspired by love and, well, I might as well face it, I’m addicted to love.