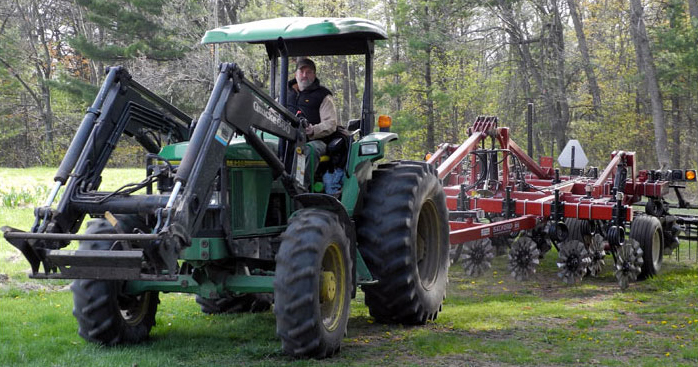 Scott has been a professor at the University for 18 years, chemistry chair for six, and at Simcoe Hall for almost four years.

I try not to watch the clock too closely. Mostly spend time on our farm in Northumberland County. It is 300 acres of cropland, hayfields, forest, beaver pond, and meadows set among rolling hills.

There never seems to be a shortage of things to do out there — be it constructing buildings or roads, farming, cutting firewood, or just gamboling around the property. It gives me the chance to work with my hands in a way less possible in my day job.

I grew up on a large cattle / pig ranch in the Ozarks of Missouri where hard work and long hours were the norm. When I left, I had no intention of ever making farming a career but have always desired a connection to land. After my undergraduate degree, Donna and I spent a few years in the Philippines as Peace Corps Volunteers (PCV).

In being accepted as a PCV they were not at all interested in my chemistry BSc but figured I’d be useful as an “agricultural extension agent.” This translated into working alongside swidden agriculturalists (with the Mangyans — a Filipino cultural community) growing mung beans, bananas, pineapples, cacao and raising rabbits and pigs. Daily life mostly entailed my experimenting while my neighbors laughed.

The reality is that before we bought the farm here in Ontario (2000), I knew next to nothing about modern crop farming. I have relied on my neighbors, books, and conferences like FarmSmart (I like the dress code) that bring the best available scientific advances to the user group.

Tell us about your farm — what crops do you grow? Do you raise animals? 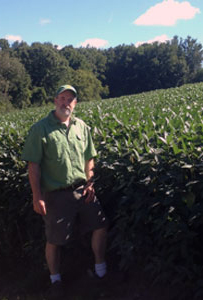 For now, the main crops are a three-year rotation of corn, soybeans, and winter wheat on about 130 acres. I have another 25 acres that is an alfalfa / hay mixture.

Depending on crop prices (high at present), I will rotate crop ground for hay ground and versa vice. I practice no till planting and use a vertical tillage tool (a.k.a. conservation tillage) that helps improve soil organic matter and limits erosion.

I’ll be planting a cover crop of red clover into my standing wheat crop, weather pending, next weekend. This helps add additional carbon and about half my nitrogen fertilizer for the corn crop next year.

I have a cooperative experiment with Ontario Ministry of Agriculture and Food and Miller Compost with a comparative compost trial (120 tons on about eight acres). I also have other acreage that has had applications of paper sludge that my graduate students have investigated as part of our interest in the fate of fluorinated surfactants.

Typically, we do grow an acre or so of pumpkins that, in prior years, my daughter Scotia provided to local schools as a fundraising exercise.

No animals at all so far.

Since we live in the city, I rarely have more than a day a week to spend on the farm. Perhaps when I retire….

I love stomping around and just looking at the lay of the land.  My motivation is to operate a profitable farm that also feeds my soul.