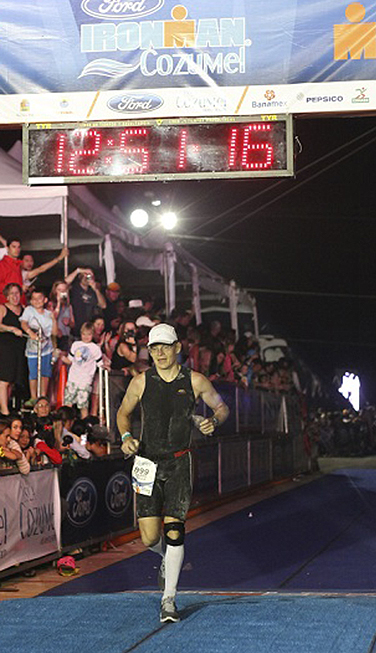 Richard has been with the University of Toronto (U of T) for 6.5 years.

I train for Triathlons and I am active in my kids’ sports.

I had played lacrosse for many years and started running again after my kids were born. Due to a history of injuries, I was looking for something a little different, which is why I started training for triathlons after joining the U of T Triathlon Club shortly after starting at U of T.

I did my first ‘Try a Tri’ in 2007 and have done a couple of races each year gradually increasing the race distances. I just finished my first Ironman in Cozumel at the end of November 2012.

How are Ironman races different than regular triathlon races?

The triathlon races are essentially the same format except the distances get longer when you participate in an Ironman. You start with a swim, and then bike, then you finish with a run. The Ironman distance is 3.8 km swim, 180 km bike ride, and at the end running a marathon which is 42.2 km. I did the race in 12 hours and 51 minutes and 15 seconds. With a race that long you need to break it into chunks and celebrate the small victories, and appreciate the surroundings as there will be bad parts that you have to deal with. A lot of people get nervous about the swim especially in this sort of format where 3,000 people all starting at once.

At the first turn in the swim, there is a large mass of people trying to make the turn with you and during my swim I got punched in the eye and my goggles filled up with salt water. You can’t stop as there are 2,000 more people behind you who are trying to make the turn also, and I would just get swum over and hit more so I had to keep swimming with my eyes stinging and not seeing where I was going.

As the pack thinned out I was able to empty my goggles and was able to keep going. During the whole swim the water was crystal clear and you can see coral and fish and as I rounded the last turn coming back to the dock 30 ft below me was a single barracuda swimming along slowly. I chose to see this as a really cool sight and how lucky I was to be able to see this as I swam. I was talking with someone after who also saw a barracuda and they said they totally panicked and almost stopped. When people ask me how the race was, I say it was 12 hours of beautiful sights, cheering crowds, and exhilarating physical exertion. Then there was 52 minutes and 15 seconds of severe pain, doubt and loneliness spread out through the whole day and not just the last part of the run.

I was not able to eat any gels or food towards the end of the bike leg. The only thing I could stomach was water from that point on. So I went into the marathon with very little energy reserves and without the capability to replenish. It was only at 21 km to go in the run that I realized I would be able to finish. Physically I was exhausted well before this, but the only thing that kept me going was seeing my family and friends at the end of each loop and knowing they would be waiting for me at the finish line. I walked a lot but kept putting one foot in front of the other and made it to the end while finishing in the top third of racers.

When my first child was born I decided I would start exercising again after taking many years off while starting out in my career. I ran my first half marathon two weeks after my second child was born. I know at the end of each race my family will be there cheering me on whether I finish first or not, which is what drives me to finish as strong as possible. As my kids have gotten older they are doing their own sporting activities, and now I am able to coach their teams and cheer for them from the sidelines and at the finish line.