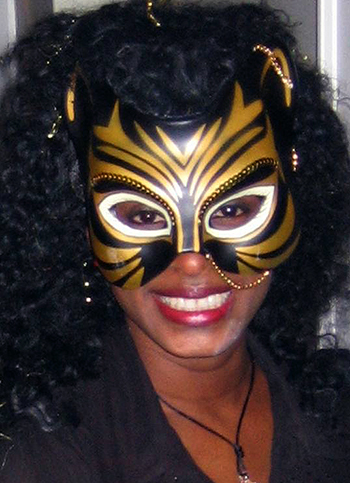 U of T Mississauga

Jack Nicholson is quoted as saying that “acting is everybody’s favourite second job.” Since my favourite job is being a teacher / researcher then it seems perfectly logical that I am an amateur thespian in my spare time.

How did you first become interested in community theatre?

Perhaps the seed was planted by my mother who is an avid theatregoer and took me along with her to the Little Carib Theatre in Trinidad many, many times. As a child I did drama camps and no school play was safe from me.  I formally trained for stage acting in England and here in Canada.

What plays have you appeared in or do you have a favourite role? Where have you performed?

In May 2011, I took on the role of a bioethicist, Ella, who was on the cusp of making a heart-wrenching decision about taking her mother off life support. This was an Alumnae Theatre’s production called Where do you get off by M. P. Fedunkiw. I enjoyed the intensity and complexity of this short Toronto play.

On the stage, I am influenced by Meryl Streep’s excellence in every role that she takes on and by Viola Davis who is a stage actress of the highest class. Most importantly I take a lot of energy from the audience when I act — much the same way that I am energized by my students in the classroom and by participants in my research projects. Off stage, my family are my greatest influence and I have many debuts and productions at home with my husband and two children.

Photo: Rhonda at a workshop in England, entitled An actor and his masks.