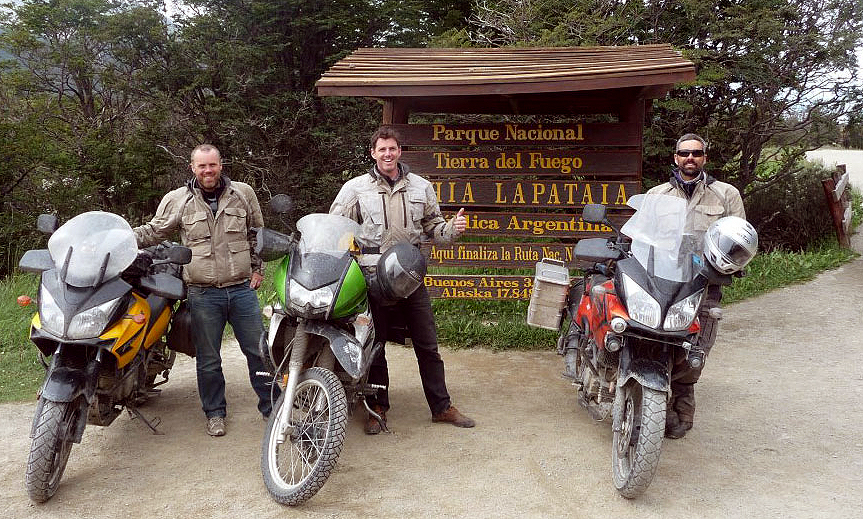 Peter has been with the University of Toronto Mississauga (UTM) since 2010.

I spend most of my time taking long, fast motorcycle trips. In the last few years I’ve covered most of North America and a good bit of Australia. Last year I rode from Toronto to Ushaia, Argentina, the very bottom of South America.

I was bit by the motorcycling bug when I was in grad school. My best friend Sam took up the hobby at the same time, so we began doing lots of trips on slow bikes around eastern Canada. Two years later in 2008, right after I received my PhD, we took six weeks to ride from Cairo to Cape Town. There was no looking back after that.

You’ve mentioned two rides: the one to South America, which was about 22,000 kilometres and the Cairo to Cape Town trip about 10,000 kilometres. Are these the longest trips you’ve taken? Do you have any other trips planned?

Those are the longest, for sure, though the fastest trips are those I take around North America. I do these trips with my Dad mostly and we’ll regularly cover 1,000 kms in a day, so the miles add up quickly.

I have a few trips in mind, time permitting. Sam and I have intentions of riding to the four corners of North America in the next year or so. I’d also like to make a month-long run from Cape Town to Nordkapp and, of course, I’d like to do a ’round-the-world ride.

What kind of motorcycle do you take on these trips?

I rode small, 650 cc bikes for those two big trips and rode a new Super Tenere in Australia. I ride an FJR 1300 around North America (and to campus and back). I trust this is all Japanese to your readers.

I am inspired most directly by my two mentors: André Blais and James Fowler. They’re both incredibly curious, kind, industrious, and creative scholars. They are always thinking about new ideas. And I am really compelled by the example of the late Elinor Ostrom, the model of a great social scientist.

As for motorcycling, no one is more impressive in the long distance field than Nick Sanders, who I had a chance to meet on my way through Panama last year. He was riding from Alaska to the bottom of South America and then back in less than 50 days. He’s the gold standard.