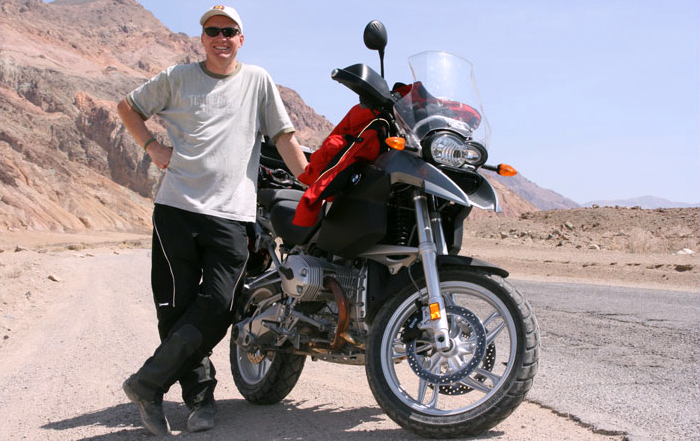 Nick has been with the University of Toronto (U of T) “for 31 wonderful years.”

What I truly enjoy doing is travelling either by motorcycle or by boat to discover new geological sites, especially in Ontario.

I do most of my biking around the Canadian Shield and particularly enjoy exploring the old colonization roads built during the mid-19th century to help settlers establish farms. Of course nothing could be farmed on this land because it’s all rock, so you come across many ghost towns — now just names on a map.

You also tend to run out of asphalt pretty quickly, so they are good for motorcycles like the big BMW because it’s designed for rough trails.

My bike and I are on first-name terms; I look after it and hopefully it will get me there and back okay, much like a horse in the old days!

I also like to boat around Georgian Bay searching out new outcrops and doing geophysical surveys of the lake floors. There’s nothing quite like going around the 30,000 Island archipelago of Georgian Bay. There’s much to be explored under water in Ontario’s many lakes.

Why not spend your downtime doing something completely unrelated to work?

I really enjoy playing ice hockey. It’s a sport I only discovered in my early forties, and I play at least twice a week. It’s a fast-paced game that leaves no time to think about anything else, so I play to unwind. The dressing room chat among the guys is pretty good too!

But I don’t consider what I do (on my bike or boat) work.

Looking for new sites can be a remarkable experience for anyone as they are clues to how our planet has evolved. When I am looking at an interesting landscape or outcrop I want to know what events took place in the ancient past to create them. It’s a passion that drives me to take these adventures, even during my downtime, and gives me a sense of where we fit into the grand scheme of things. Looking at three billion-year-old rocks gives you a wonderful perspective on life!

What other unique / remote locations have you gone to on your motorcycle?

Death Valley in the American Southwest is my favourite place. It’s breathtaking, with many off-road trails that are difficult to navigate and rocks everywhere. It’s a great place to ride and discover.

I got my first bike in England when I was 16. I became a rocker against the mods who rode scooters.

I had a series of ancient Brit bikes from the ’50s that were barely road-worthy and I spent most of my time fixing them, especially the electrics. The words ‘Lucas Electric’ still gives me nightmares, but I still get turned on by the lovely smell of warm engine oil.

I could hop on my motorcycle, get out of London and travel south to what’s called the Jurassic Coast in southern England to collect fossils, so bikes and rocks to me are inseparable. I sold my bike when I left for graduate studies in Canada and I gave up riding while my kids were young.

What inspires you to hop on your motorcycle?

Just starting up that big 1200 cc twin gives me a thrill of anticipation of finding something new I haven’t seen before. It’s not like being trapped in a steel cage. Being out in the open, you get to smell and sense the environment around you.

Being on a bike is the best experience I can think of but if you told my family it would drive them crazy!