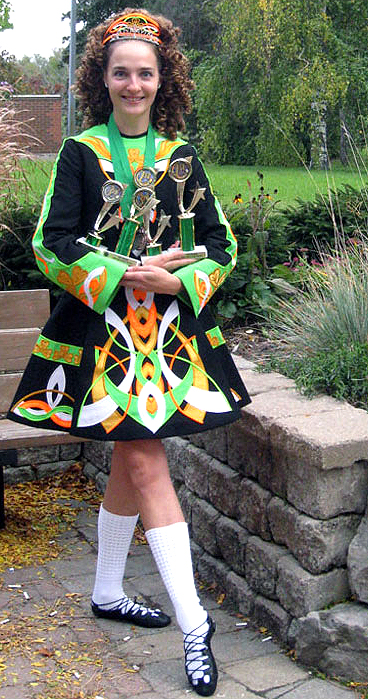 Nataliya has been with the University of Toronto (U of T) for seven years.

I am passionate about Irish dancing. I dedicate all of my free time to training and competition. I also actively participate in promoting Irish culture and dance in Canada and worldwide.

How did you first become interested in Irish dancing?

I am originally from Kyiv, Ukraine, and started Irish dancing there. I have always liked Celtic music and culture. The first time I saw Irish dancing was during the Eurovision Song Contest in 1994.

While I was an undergraduate at the Kyiv National University, the famous show Lord of the Dance came to Kyiv. After seeing the show I fell in love with Irish dancing and could think of nothing else but of learning this beautiful art. Unfortunately, there were no Irish dancing schools in Kyiv at that time.

In 2005, as a master’s student, I discovered that a new school of Irish dancing called Shannon River had opened in Kyiv.  I joined the school immediately. I had very little dance experience and little natural talent, but I was driven by a desire to excel in Irish dancing and one day to be able to perform like the dancers I had seen in Lord of the Dance and Riverdance.

I attended four classes a week, each class ranging from two to four hours in length. My teachers were the same age as me and had learned mostly from watching tapes and attending the occasional workshops abroad. They had a lot of natural talent and learned quickly with little guidance. Whatever they mastered they passed on to their students.

After a short time of studying at Shannon River, I began to perform and participate in festivals. A year after I began Irish dancing, I finished my master’s degree and was accepted to the PhD program at U of T.

There is a very big Irish population in Toronto and there are many dance schools with excellent teachers. Right after arriving I joined the Greenfire Academy of Irish Dance at the Celtic Dance Centre and have been a student there ever since.

After my first year in Toronto, I began to compete, and two years ago I moved to Preliminary Championship, the fifth (out of six) competition level.

Where do you perform?

Apart from competitions, I perform at different fairs, festivals, seniors’ homes and corporate events, especially around St. Patrick’s Day. Every year my school participates in the Toronto St. Patrick’s Day Parade. Last year we were voted Best Marching Band by the parade organizers.

When I return to the Ukraine for summer holidays, I participate in the music festivals with Irish dancing performances and workshops. For the past two years I have been participating in the annual festival of medieval culture called Ancient Medzhybizh where I performed and conducted Ceili workshop (Ceili is Irish social dancing).

Have you received any awards or honours?

I have earned many trophies and medals from competitions at different levels. My awards include an eastern Canadian championship in 2009 for a Traditional Set competition. In 2010, at the Ancient Medzhybizh, festival organizers presented me with one of three keys awarded that year to Medzhybizh Castle, where the festival takes place. Last summer I won a perpetual trophy in the Championship Treble Reel competition, and in December 2012, I participated in the Feile Nollaig (Christmas Festival) competition in Ottawa where I received my first award in the Preliminary Championship.