Monika has been with the University of Toronto (U of T) for five years. 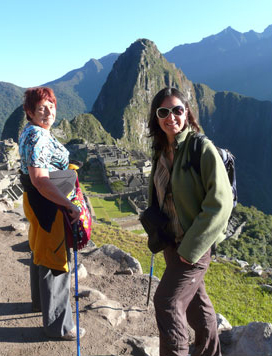 I love to travel. I have been to more than 35 countries. I enjoy photography and have exhibited my photographs in group shows and recently held my first solo exhibition, Sky Candy at a Tan Coffee café. I also enjoy experimenting with videography, watching and discussing films and I have helped judge the shorts program for Rendezvous with Madness Film Festival.

In addition to my travel and film interests, I also volunteer on the housing co-operative board where I live. I’m learning Spanish and auditing a U of T history class this semester. And of course, I spend time with family and friends.

My father worked in film in Poland where we are from.  He was constantly referencing movie making and directors. I first started to take photos as a young girl and my father critiqued them for composition and structure. I always understood that films and images were constructed and this interested me. In order to learn more about film and to learn to deconstruct it, I studied history and film at U of T. These were by far my favourite courses.

Through screenings and lectures I became critically aware of media, fine art, popular culture and politics. After graduating in 1995, I worked on a graduate fine art thesis film made by friends at York University. This was my first exposure to Canadian low-budget filmmaking. In spite of working on the film outdoors in January at Wasaga Beach during a bright, but brutally cold winter in 1996, I was forever captured by the spirit of transforming an idea into an image.

Where do you show your films?

My films have been screened at a variety of local film festivals including the Toronto Urban Film Festival, Rendezvous with Madness, and Nuit Blanche. A short film I made, Fear stories from the 8th Floor, was screened at the Big Sky Documentary Film Festival in Montana this year as part of a documentary feature film. This short film, which is embedded in a full feature documentary film, is programmed to screen at the Costa Rica International Documentary Festival, November 1 to 5.

Any advice for aspiring short filmmakers?

Go for it. It can be as simple as grabbing your camera and selecting the video setting and starting. Be resourceful. Consider taking courses at colleges and universities and meet other aspiring filmmakers. This is easy to do through clubs, associations, festivals, discussion groups and volunteering on film projects. Just start.