Professor Mark Leith,
Clinical in the Department of Psychiatry

Mark has been with the University since the early ’80s. 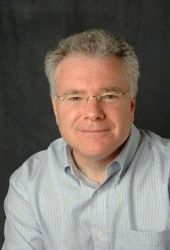 I love theatre. I’m part of Act II Studio, a program affiliated with Ryerson University. I have been in the program for two years now and, during this time, I have written Dinner with Goebbels, a play about the human mythology of evil and modern marketing of warfare. The production is based on a fictional dinner between Dr. Joseph Goebbels, the minister of propaganda in Nazi Germany, Edward Bernays, Sigmund Freud’s nephew and the founder of public relations, and Karl Rove, George W. Bush’s former PR consultant.

Why did you choose to write a play like this one? 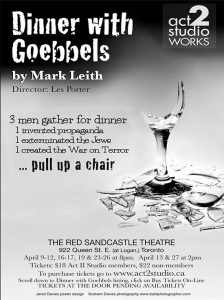 I have always been interested in the psychology of what drives men to go to war. Having written many articles about this topic over the course of my career, I wanted to focus my play on the modern marketing of war.

I became interested in Edward Bernays when I discovered that Dr. Goebbels had used Bernays’ books in his work to promote the Holocaust and the invasion of Europe.

Through my research I also learned that Karl Rove drew on Bernays’ ideas to ‘up the invasion’ of Iraq and create the current war on terror.

Playwriting seems totally different than psychotherapy. What is the common thread?

Theatre, like psychotherapy, is based on a narrative. Both come from the human capacity for storytelling.

What, or who, inspires your work?

I grew up during the Vietnam War and, even as a child, questioned the institution of war. I’m part of Physicians for Global Survival Canada, an advocacy group committed to the abolition of nuclear weapons and non-violent conflict resolution.  I have been able to combine my passion for anti-war activism with my love of theatre in writing, and being involved in the production of, Dinner with Goebbels.