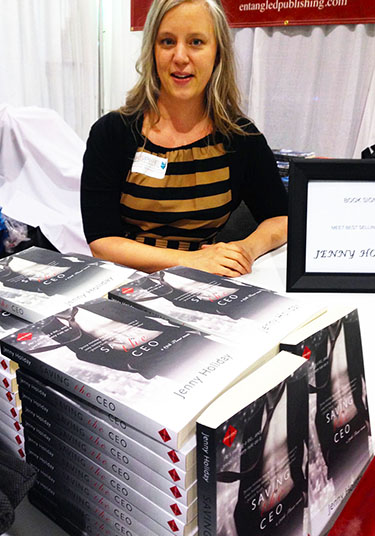 Jenny has been at the University of Toronto (U of T) for 12 years.

How did you first become interested in novel writing?

I didn’t discover romance novels until I was in my 30s. Of course I knew they existed, but like a lot of people, I thought they were fluffy, silly and formulaic — literature lite.

That embarrasses me to admit now, because in reading and writing romance, I’ve discovered an amazing feminist community of people who love stories. But until I actually picked up a romance, I had no idea. Once I did, I proceeded to read truckloads of them.

At some point, I put one down and thought, “Hey, I’m already a writer. How hard can this be?” Of course, the gods did smite me for my hubris because it turned out writing a book that people actually wanted to read was a wee bit harder than I’d anticipated! My first book was — rightly — rejected by everyone and their mother. But my second book got me a literary agent, and she sold that book (and subsequent ones) and here I am.

How do you find the time to write?

I get asked this a lot, and I usually jokingly answer that I don’t watch TV. But it’s part of the actual answer. I once read an interview with the American writer and radio man Garrison Keillor. He was answering questions from readers, and a young man who wanted to be a writer asked how he was supposed to become a writer if he had to simultaneously work another job to make money. Keillor said, “Stop watching TV and you’ll get 25 per cent of your life back.” I always remembered that, and it really has proven true for me. And I love TV, so this is actually a sacrifice.

I guess the wider point is that there’s more time available than you think if you decide to prioritize something. I write religiously at lunch and in the evenings, and I spend most of my U of T vacation days working on job #2. But it is a trade-off: not only do I not watch TV, other things don’t get done.

When I started, it was writers I admired. Two of my all-time favourites were (and still are) Courtney Milan and Kristan Higgins. I’m still inspired by writers, but now I also hear from readers, which is the coolest thing ever. There’s nothing more inspiring than having a reader write to ask when the next book is coming out.