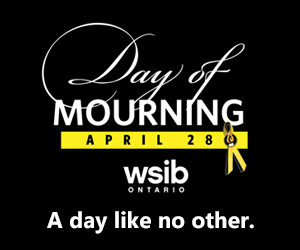 Flags on all three campuses will be lowered to half-mast on Friday, April 28 to observe the National Day of Mourning for workers killed or injured on the job.

Officially recognized by the federal government in 1991, the National Day of Mourning is held annually on April 28 in approximately 100 countries around the world. It has been adopted by the American Federation of Labor & Congress of Industrial Organizations and the International Confederation of Free Trade Unions.

According to the Association of Workers’ Compensation Boards of Canada, in 2015 there were 852 workplace deaths recorded in Canada. Since 1993, an average of 900 employees died from work-related incidents in Canada each year, averaging more than two deaths every day.

The Canadian flag on Parliament Hill will fly at half-mast as well as those of businesses and other organizations across the country.

The University of Toronto (U of T) will participate in this National Day of Mourning by lowering the flags in various locations across each campus. Through this act, U of T affirms its commitment to the promotion of health and safety for all members of the University community and to the provision of a safe and healthy work and study environment.