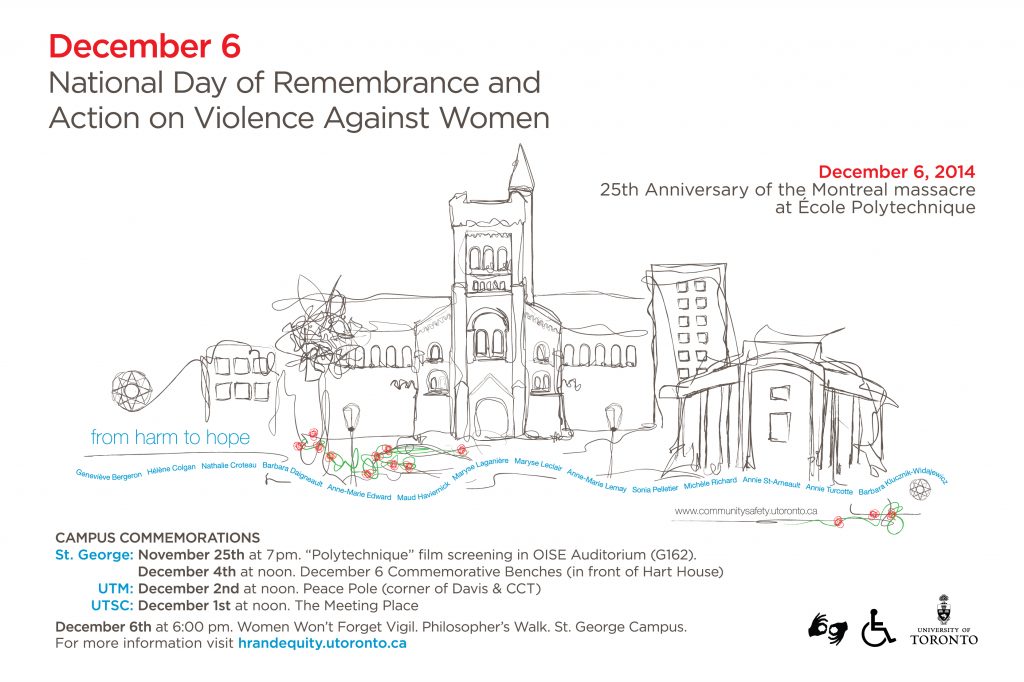 December 6th is the National Day of Remembrance & Action on Violence Against Women in Canada, as proclaimed by the Government of Canada on December 6, 1991.

On December 6th, 1989, 14 women were gunned down at the Ecole Polytechnique in Montreal, most were Engineering students, and they were specifically targeted because they were women identified as feminists taking the place of men in what had been a male-dominated profession.

This year is the 25th anniversary of the Montreal Massacre, and we will once again take time to remember, not only the women who died tragically at Ecole Polytechnique, but all women who are victims and survivors of gender-based violence. See the ‘Campus Commemorations’ sidebar for a list of events.

December 6th is also a part of the ’16 Days of Activism Against Gender-Based Violence Campaign’ which begins with the International Day for the Elimination of Violence Against Women on (November 25) and ends on International Human Rights Day (10 December) to reinforce that eliminating all forms of violence against women is a human rights issue and that the act of perpetrating violence against women is a human rights violation.

Suggested donation is $1 for students, $2 for staff / faculty. You can find the buttons at:

Proceeds from the Rose buttons will go to: Native Women’s Resource Centre of Toronto.

Proceeds from the Rose buttons will go to: Anduhyaun.

Proceeds from the Rose buttons will go to: Scarborough Women’s Centre.

Contact person for accessibility requests: Tanya (Toni) De Mello, Equity & Diversity Officer or Tina Doyle at Accessability at ability@utsc.utoronto.ca or 416.287.7553 and 416.287.7560 (Tel/TTY). There will be snacks at the event.